​In the eleventh century the King Anawarahta imposed Buddhism in Burma.  However, he never managed to eradicate the cult of the nats (spirits)  and decided that  37 Nats could be worshipped in Buddhist temples. Contemporary artists use nat representation to express a rebellious spirit. 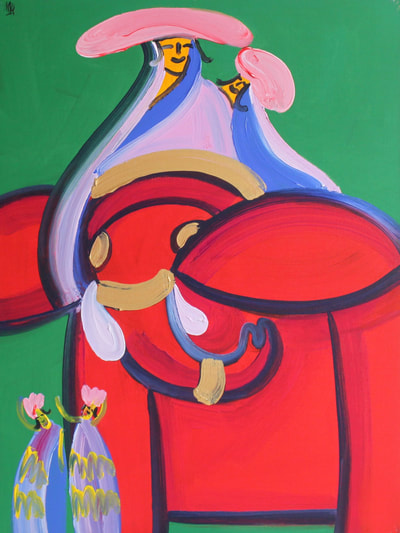 "The Lord of 5 White Elephant" painting by Nyein Chan Su refers to the Burmese belief that white elephants bring good fortune and are a sign of legitimacy for the leaders of the country. 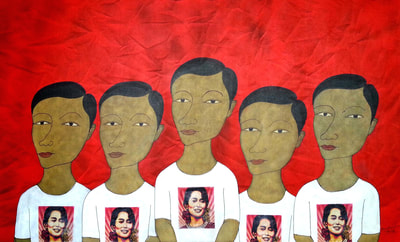 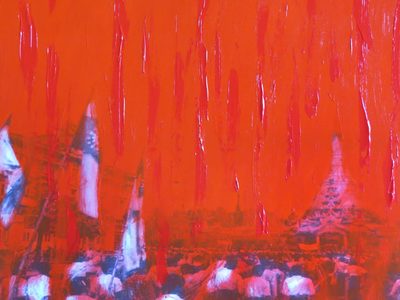 Memories for the Future by NCS uses black & white family photos as reminders of the national history, while Red Spirit  is based on archive photos of the 1988 events completely covered with red paint. For the artist these series aim to record historical events and warn the younger generations about what could happen again. For his part Min Zaw expresses the anxiety of his generation who grew up with no hope having lost any identity.

"Metta" meaning  "Loving Kindness" is one of the main values of Buddhism. In "The Voice of Hope", a series of interviews with the writer Alain Clement first published in 1997 , Aung San Su Kyi explained that Metta was a founding principle of her political action. There is no doubt that Tartie's series titled Loving Kindness refers to he political agenda of the NLD (National League for Democracy), Aung San Su Kyi's party. 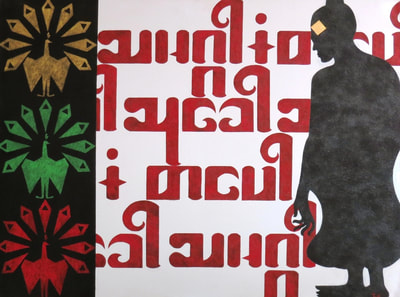 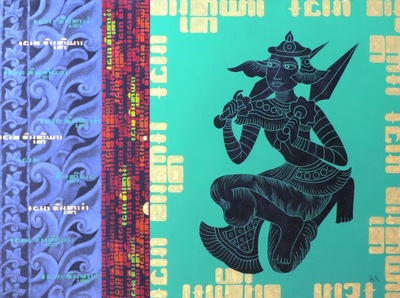 Tartie rejuvenates the traditional representation of mural paintings with modern composition and techniques. The peacock depicted in the colours of the national flag is not only a buddhist symbol but also a symbol of the country. The writing, which at first glance seems to be in Pali, the sacred buddhist language derived from Sanskrit, has actually no meaning. Would eventually the artist be questioning the way politicians use religious beliefs?

Aung Soe Min openly contends that there is such a crisis in his country with his series titled "Buddhism Crisis" . There is no judgment in Bart Was Not Here's  print representing Ashin Wirathu, but certainly a invitation to ponder the current events.

The above two posters by ZZ Dau Dai are for sale for only 30 SGD each. They address contradictions between former statements by Aung San Su Kyi and currents denials of freedom of expression on the one hand and on the situation of the ethnic minorities on the other.